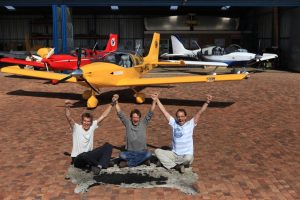 Sling Aircraft was founded in 2006 by Mike Blyth and James Pitman in Johannesburg, South Africa with the goal of producing high quality, high performance aircraft for Aviation enthusiasts around the world. They started the business in an industrial complex near in Edenvale, South Africa with minimal material, tools, or assistance. Mike was the principal designer of their first aircraft while James took care of the Administrative duties surrounding a startup company. Their first design was a 2 seat Light Sport Aircraft (LSA) for the world market which they immediately took to prototype production. By 2008 they had moved to Tedderfield Airpark, in the heart of Gauteng province, built their first airplane and began testing its flight characteristics to ensure flawless handling and performance. In an effort to produce the highest performance, best handling LSA possible they contacted an ex-military aerodynamicist who joined the team to begin tweaking little design flaws. By the end of the process they had built a light weight airplane that had impeccable stall and recovery characteristics and its handling had no comparison throughout the industry. In order to prove to themselves and their future customers they had a worthy achievement on their hands they set out on a Westerly Circumnavigation. This was the first trip of its kind in such an airplane. In 40 days they had circled the globe, put over 240 hours of flight time on the Sling airframe, and made multiple long distance flights over open ocean (sometimes lasting in excess of 20 hours)!

After their first successful design and adventure Sling Aircraft began producing the Sling for buyers in Africa and Europe. They have sold over 100 airplanes in their first two years of production in both kit and ready-to-fly format, having delivered more than 65 to date. Simultaneously they took on another director, Jean d’Assonville, and the three of them began work on the next design, a lightweight 4-place experimental, another first for these three gentlemen. The Sling 4 would be the first of its kind throughout the world using a Rotax powerplant and achieving incredible reliability, durability and economy. Design began in 2009 and finished in mid-2011. The guys built a prototype in just over 3 months and once again set out to put the aircraft through its paces. With multiple legs over 20 hours and one leg lasting a heart pounding 27 hours, the Sling 4 made its own circumnavigation finishing in September 2011 without any issues.

Sling Aircraft is still located at Tedderfield Airpark in Johannesburg but has moved to a much larger hangar complex in order to accommodate the increasing number of orders. They are using high quality machinery, employ about 300 people from the local area and are churning out airplanes at a fast rate.